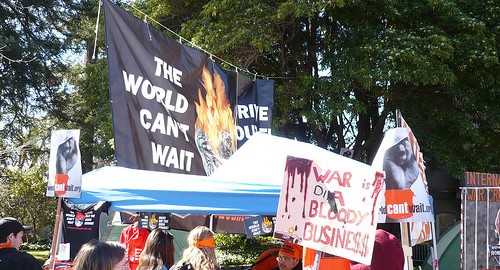 My home town, the city of Berkeley, California is in the public eye for objecting to a US Marine Corps recruiting station downtown, near both the university and the high school. The right wing blogosphere went kind of nuts at this and you can read more about it here, at the Berkeley Daily Planet.

I went today to see the protests. The anti-war group, Code Pink was set up in front of the City Hall. They had camped over night. This is a women’s group and most, but not all, of the women seemed to be retirement age. There were also a lot of very energetic young people running around, most ly on the other side of the street.

Also across the street were a bunch of right wing pro-war types. Even in Berkeley, alas.

They had a very loud sound system set up playing Sousa marches and country songs. While I was mingling with the Code Pink types, somebody I knew from Mills came up to me. She said that when the pro-war folks showed up at 5AM, they started chanting “Burn! Burn! Burn!” at Code Pink. “They just seemed very angry.” She said.
Parked behind all the action were a bunch of news vans. Whenever the police started herding people around, something they were fairly aggressive about, the news cameras sprung into action.
I didn’t stay at the demo long. I was enlisted to help distribute water to the Berkeley High students. Many of them had cut class to go protest. I heard one girl telling her friends that her “mommy” had given her permission to skip school and protest. The kids involved seemed to be very diverse – girls and boys, many races, many teen sub groups. Skaters, goths, and jocks were all out there, all having a good time.
I quit distributing water when the kids started throwing it on each other. I’m not going to carry several liters of water around on my shoulder so they can play with it. As I got on my bike to leave, I went very near one of the news vans. Inside, I heard the anchor ranting about how this sort of thing has been going on for 40 years. The unbiased media was full of scorn for the peace movement. Isn’t it tired to spend the last 40 years advocating for social justice and non-violent conflict resolution?
Even if some individuals have been advocating the same thing in the same way for almost half a century, that doesn’t make their cause less right.