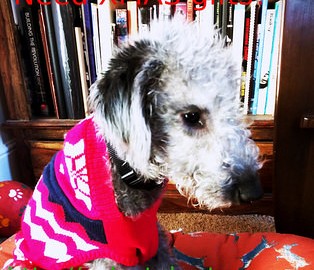 I decided this weekend that what would really be a good idea would be a photo of my puppy wearing a Holiday jumper and headphones. It turns out that it’s really difficult to put things on puppies and then get them to sit still. Especially if they’re teething. My pinkie got caught in a futile attempt to prevent the jumper from being shredded and the headphone cables now need to be re-soldered. I hope that professional photographers that work with puppies are well-paid, because they certainly deserve to be. 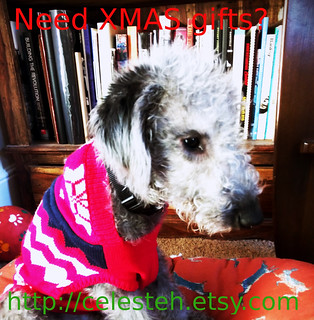 I got one photo that came out more or less ok, and adding to my frustration, graphic design is also really hard. Really, my creative skills are almost entirely musical in nature.
Finally, I decided to give up and instead give my dog a nice long walk, as a thanks for (sort of) putting up with being made to wear strange things. As we went by Hackney’s medieval tower, I noticed they had a ‘Santa’s Grotto’. Aha! 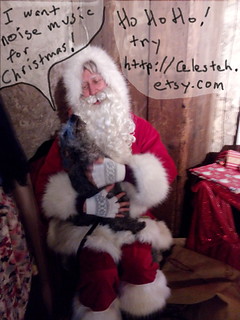 My graphic design skills are still rubbish, but it helps to start out with a really good photo.
Sonia’s dad is involved with the Hackney Historic Buildings Trust, which runs open days at the Tower and both her and I have volunteered there, so we chatted with the elves and gave mulled apple juice to queuing families, until finally there was a lull and no children were waiting. Father Christmas turned out, fortunately, to love dogs and was happy to pose for a photo. (It also helped that he didn’t notice that the puppy was actually chewing on his beard at the moment this was snapped.)
If even adorable puppies want noise music, maybe your friends and family do too!
I have an idea for some puppy themed, music, actually. He likes to race around my living room for a bit, and while doing proper tracking on a webcam is somewhat difficult, detecting pixels that have changed massively from frame to frame is kind of trivial. So I could have a sound process controlled by the paths chosen by an excite-able puppy. It would be fun to do and make his excesses of energy something other than distracting – at least for one piece!
Do you want to give a gift of puppy-generated music this Christmas or Hanukkah? Order now to beat the rush!