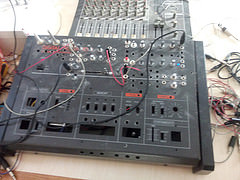 Someone on Diaspora asked me: if I only use recorded sounds once, how does this effect sustainability of my music?
This is an interesting question! While the sounds themselves are not recycled, this actually does effect my disk space usage. Once a piece is done, its done and I don’t need the source sounds any more, so I have no need to keep them around. This means that at the end of creating a minute of noise, I have, usually, an uncompressed file and a compressed Mp3 (plus whatever file format the commissioner wants for themselves). A minute of AIFF or WAV runs up to 11 MB and the MP3 is around 1MB, so this really takes up very little hard drive space. (Indeed, the Mp3 could fit on a floppy disk!!) 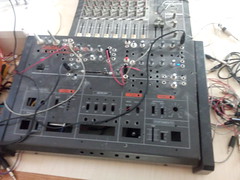 A recycled synth I saw on Sunday.

There are other concerns in sustainability however, one of the most important is e-waste. Every time you get rid of an old computer, it needs to be disposed of without causing pollution. This makes disposal a challenge. Indeed, getting a new laptop involves a fair amount of pollution and may also include conflict minerals. I’d say upgrading hardware is a greater sustainability issue than hard drive space might be. How does this interact with my music?

Commissions are ecologically friendly and make great gifts! Digital-download-only commissions are a perfect gift for for Green friends and family who want to avoid clutter. Delivery is guaranteed in time for Hanukkah or Christmas. Order now! The introductory price of £5 will only last until Thursday.

Continuing to work through Etsy’s guide to holiday marketing, let’s look at what else customers (that’s you!) need:

In my previous post, I wrote: ‘This is noise music for busy professionals, for people who are new to noise or for folks who just like miniatures.’
Consider for a moment that every culture of humans on earth makes art and music. No matter how isolated or remote, everyone’s got art and music. Music is a human universal. Indeed, it’s part of what makes us human. We all know we need music – that’s why mp3 players are so popular. But why noise music in particular? And why miniatures?
Well, what is noise? This gets into some deep philosophical issues! There are some great books on this that I can’t hope to summarise here, so let’s just say that noise music is made up of sounds not often currently used in music. Noise has sounds, textures and forms that are currently outside of established boundaries of most music – for now. But music is constantly changing and needs new forms, sounds and textures! Today’s noise sound is tomorrow’s pop sound. Noise music is, in fact, the future of music.
It’s not the immediate future. Indeed, noise music offers potential futures. But by listening to noise music, you hear the cusp of music before others. If you’re a busy professional, you know that those who get ahead are the ones who anticipate trends before they happen. So much capitalist success is realising what’s going to be in demand in advance, so you’re able to come up with the supply.
Obviously, for capitalists, there’s more to life for work – there’s also conspicuous consumption. But it’s good to be in practice on keeping ahead of things, inside and outside your fields. Your friends and colleagues will recognise your far-sighted views, when you share a commissioned noise music piece on your social media account – whether on the tried and true CIA-data-gathering of facebook or the trendy and exciting ello, your contacts will know that you’ve got your eye on the horizon!
Because the piece is short, it gives you a bite-sized glimpse into the future, without unmooring you from the demands of daily life. Yes, you’ll be transported, but still have plenty of time to make your train! And, indeed, your associates who are curious about your new work of art, will be willing to give the whole thing a go. Your cultural capital will increase as a result of your far-sightedness and the easily digestible length. What could be conspicuously consumed than a short musical commission!
Is someone in your life is a rampant capitalist, super busy or would just appreciate and extra bit of cultural capital? Short noise pieces make great gifts. Order now and delivery is guaranteed in time for Christmas or Hanukkah. Act now to get the sale price of just £5 for one piece!

I’ve just read the Etsy Guide for building one’s shop, including a section on what customers (that’s you!) need:

The making of a minute of noise starts with material gathering. For acoustic pieces, some of this may have already happened! When I was sat in the bell tower of San Giorgio Maggiore, Venice, waiting for the hour to strike so I could record the bells ringing in 2011 or just last month in St Augustine’s Tower in Hackney. Or, I might go out to acquire sounds, sticking microphones to clothes washing machines, or in refrigerators, or to get the squeal of breaks at Tower Hill Station. Perhaps, even going further afield for your composition, dangling microphones just into the edge of active volcanoes, to get the sound of it melting! I don’t re-use sounds, so whatever sounds I’ve gathered for your piece will only be in your piece.
For analogue sounds, I’ll probably start plugging cables into my synthesiser, but might try a zero input mixer going to a chaotic filter bank. No to patches are alike. It’s nearly impossible to recapture a patch once it’s unplugged, even if I wanted to. For folks after digital sounds, I’ll fire up SuperCollider and start creating a timbres and a tuning to go with them – based on a bespoke tuning algorithm. (Which I should really publish a paper about, actually. If you want to try it yourself, its in the TuningLib quark.)
Once I have a base layer of sounds, I’ll start manipulating them, either varying their sounds for the minute duration or finding extra sounds to go with them. Obviously a minute is not very long, but well over a hundred discrete events can happen in that time, all of which must be related to each other in order to make musical sense, but different from each other in order for progression. What features will vary over the minute and by how much? What sonic glue needs to hold the thing together?
Usually, for a one minute piece, I’ll have three major sonic ideas, all of which will be closely related to each other.
Every piece comes with program notes explaining how it was made, where the ideas came from and how it was assembled. For digital pieces, the source code to create it is also available! You can find examples of past commissions, including recordings and program notes on my podcast.
I started making one minute pieces in 2007, when I was in a bit of a rut and bored by everything. I didn’t want to listen to anything for very long. I ordered my iTunes library by duration and only listened to stuff that was less than two minutes long. If I only wanted to listen to such short pieces, it stood to reason I should only write such short pieces. But while working on them, the possibilities of the duration just began to expand. I was spending about 4 hours to write a minute and that time investment was getting longer and longer, as more and more subtlety and opportunities for expressiveness became clear.
I took a break from writing shorts, not because I wanted to, but because my supervisor told me that my PhD could not be all one minute pieces. so, reluctantly, I began working on longer pieces again.
Why have I come back to this short duration? Not just because of the wealth of possibilities, but also because of extreme personal grumpiness. Your music is handmade by a curmudgeon in Hackney.
But why should you want a minute of noise? Because it’s the best duration for grumpy people! Even somebody with an attitude that could sour milk will find a minute to enjoy a hand crafted piece of noise. Your friends and associates will all be happy to listen for one minute. A minute is accessible on many occasions! You can spare a minute to listen to something. This is noise music for busy professionals, for people who are new to noise or for folks who just like miniatures. Short noise pieces make great gifts. Order now and delivery is guaranteed in time for Christmas or Hanukkah. Act now to get the sale price of just £5 for one piece!

The new anthology, Women Take Back the Noise is now available via http://ubuibi.org/wtbtn. It looks really cool. Alas, I am not on it because I was confused by the context of the call for works.
The blurb on the webpage says that the CD case actually makes noise when you touch it. I think these little circuit things people are starting to do for distribution are the future. Anway there are only 1000 of these available (well, 999, since one is mine), so order quick if you want one.