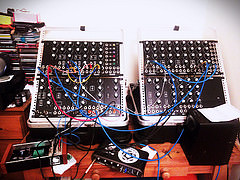 I’ve just posted a new piece of noise to my podcast, which was commissioned and titled by Dan Stowell.

Shorts #30: A lazy afternoon in the shade

The title he gave me is a reference to the Philae comet landing. Dan asked for analogue noise, adding he wanted ‘undulations’, if possible. I made some sound that seemed fairly undulating to me, which I recorded in five tracks, all somewhat different from each other. They used my new Gravity Well module from Circuit Abbey, which does orbital modelling. Since I was checking for comet news in between recording, this seemed to fit with the feeling of the day. I decided to use the comet mission as a metaphor for how to mix the piece. 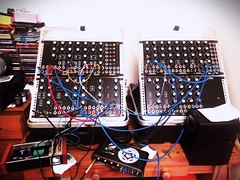 The first part has a slower undulation and a slowly looping cycle, which I imagined like orbiting the solar system. Then it goes to a much tighter, shorter loop, like orbiting the comet. Then it goes into a nice low rumble, like rocket engines. Finally, it ends with a very low clicky sound, like the comet might be making. Thinking of it in this way really helped me to organise the material, which had more variation than I would normally use for such a short piece. 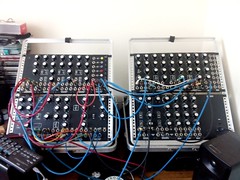 However, a problem became apparent when I tried to listen on my laptop’s internal speakers. The nice low rumbles were too low for my speakers! However, in the meantime, an actual comet sonification was released by the ESA, which is striking for a few reasons, including how beautiful it is and how much it sounds like synthesis! I decided to emulate it, with a pulse wave and white noise going through a resonant bandpass filter, with (alas, digital) reverb added on in the mix. This filled up the top frequencies and also gave it a good cadence at the end. It definitely made it a stronger piece, but I think it overwhelmed the undulating
Normally, in such a short piece, I would have three closely related ideas. This piece, however, has enough ideas for a piece two or three times as long. However, if I were going to do one thing different, it would be to use a different reverb. I’ve been wishing I had spring reverb for more than 20 years now, so maybe it’s time to finally give in.
There are a lot of reasons you might pick to commission a piece of music, like just because you want to be a patron of the arts! Commissions also make great gifts. If you order in November, delivery is guaranteed in time for Hanukkah or Christmas!