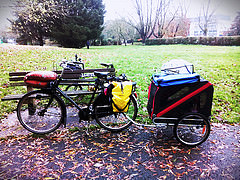 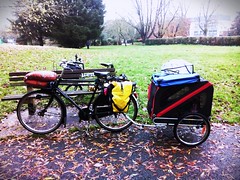 I took most of this week off. I went to the New Forest with my puppy, my wife and a couple of bicycles. She rode my touring bike and I rode my delivery bike, with a dog trailer attached. The kit I was carrying definitely outweighed me. Fortunately, the New Forest is only slightly hilly.
It is full of wild horses! These are not like the wild Mustangs of Nevada, but are sort of fat, large ponies that mill around and eat, but they very nice looking and unafraid of people. This is probably because the term ‘national park’ in Britain means an area where you are allowed to build houses and have farms and it not actually a park as I know the term. Although the new forest does have little pockets of land that have trees on them.
We were staying in kind of an odd cabin. Upon arrival, it became clear that the ‘kitchen’ was a bit of an optical illusion. It had lots of kitchen cabinets and a cutting board and a tea kettle and a surprisingly large supply of wooden spoons, but was missing some details like a sink or any kind of cooker. It turned out that a microwave and a tiny oven were located in an outdoor shed that had a combination lock and no lighting. Which is how I came to be standing outside a shed in the pouring rain checking if a ready meal was done. I very strongly suspect that the cabin was registered with the local authority as a shed or something. As there was no kitchen, then it obviously isn’t meant for human habitation, right?
After returning from the fun but slightly shambolic holiday, it was time to prepare for Thanksgiving. One of the advantages of being abroad is that all the shops are open as normal, so its completely reasonable to stroll into a shop Thanksgiving morning (or even evening) and get what you need. My menu this year was:

My mother in law got very enthusiastic about everything and contacted her American friends for some recipes and so turned up with a wild ride with sausages, a green bean casserole and cranberry sorbet. She had a bit of a comical adventure trying to find ingredients, not realising that ‘frozen orange juice’ meant concentrated. Also, she read that an American cup measure was half a pint, and so was using British pint, which is significantly larger. I’ve never seen so much cranberry in my life.
My wife also made some lovely pumpkin bread and my friend Irene brought rice pudding. I made a pumpkin pie, which went terribly wrong and will not be mentioned again.
Around 12 people came over and fortunately, I made enough food that nobody left hungry. It was a lovely evening, at the end of which, I was too tired to move.
Now that this little break is over, when my hangover wears off, I will quickly be back hard at work at making noise commissions. I brought my recorder to the New Forest, but I learned that English forests are extremely quiet in November. The horses made some nice sounds, but my dog was acting strange and untrustworthy around them, so I didn’t get any recordings. Indeed, I was so exhausted from pedalling such a heavy bicycle that I barely took any pictures.
In my home country, this weekend has been taken over by a million holiday sales in shops and finally with ‘Cyber Monday’ which is the big day for online sales. All of it filled with desperate searching for the perfect gift for friends and family.
My dad is really hard to shop for. He doesn’t want much and what he does want, he just buys for himself. However, he is interested in arts and culture. A few years ago he had season tickets to the San Francisco Symphony and even managed to get me an introduction to the conductor!
For people like my dad, noise music commissions make fantastic gifts. The physical CD from the commission can be wrapped up for under the tree or other exchange. It’s something unexpected, with cultural capital and his name attached as the honouree of the actual piece of music. It’s a great conversation piece. The music is short, so he can store it on his phone and play it for his Square Dancing buddies before the dance starts.
Do you have somebody like my dad in your family, who is hard to shop for, but loves a good conversational started and has an interest in arts or music? This would make a thoughtful gift – something they’ll mention for years afterwards. Get a commission today and the CD will arrive in time for Christmas or Hanukkah. The price goes up after Cyber Monday so get it now!