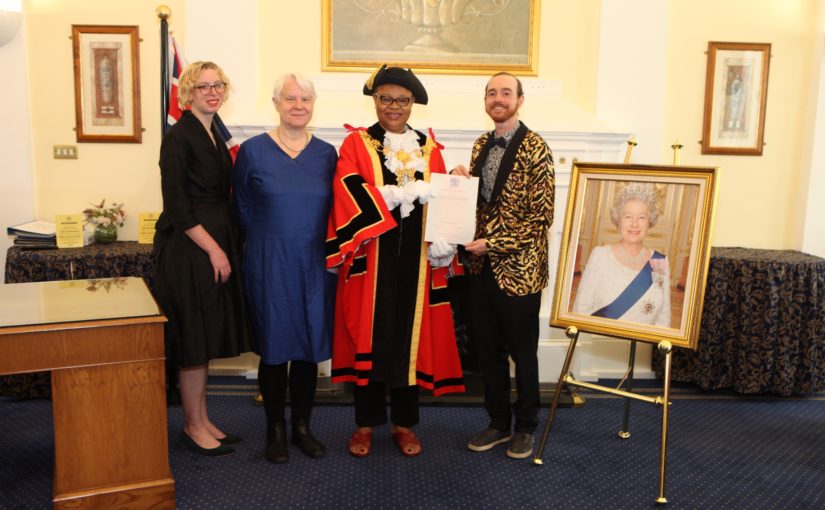 What a time to become a subject!

Recently, I swore allegiance to the queen at a mandatory ceremony. 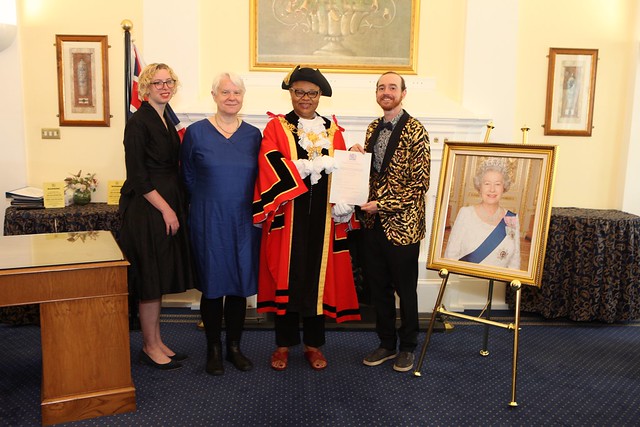 I’m now a citizen of the UK and of the European Union, although one of these citizenships is about to be stripped away. Alas. But I did have a fun party. 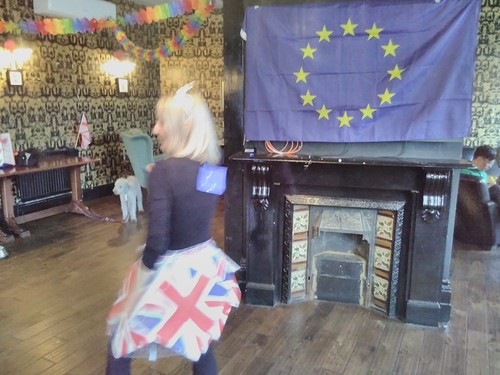 Almost immediately upon gaining full rights in my country, it was plunged into a constitutional crisis by a prime minister who has absolutely no mandate. He was selected by 75k members of his party: angry white extremely conservative middle class men from the home counties. They want the UK to leave Europe with no deal, however, parliament is not on board with this plan.

There has been a general election since the referendum, so parliament, unlike Johnson, does have a mandate to act on Brexit. However, using a clever move preferred by King Charles I, Johnson can use royal prerogative to suspend parliament and act without them.

For my non-British readers, it’s important to note that while Britain claims to have a constitution and sometimes whips itself into a crisis surrounding this constitution, nobody can point out the paragraph that is in question. Nobody can point to any document at all. It’s an unwritten constitution. All they have is tradition and precedent. Of course, I’ve just mentioned some precedent in the previous paragraph, but there are some important things to keep in mind about Charles I.

First of all is that he ruled a very long time ago and was a king rather than a PM. Secondly, and perhaps more importantly, he was beheaded for this behaviour.

The day that it became clear Johnson was poroguing parliament, there were spontaneous protests around the country. I went to Westminster to find the bridge blocked by demonstrators. I posted about this experience to my mastodon account, but will also summarise it here. 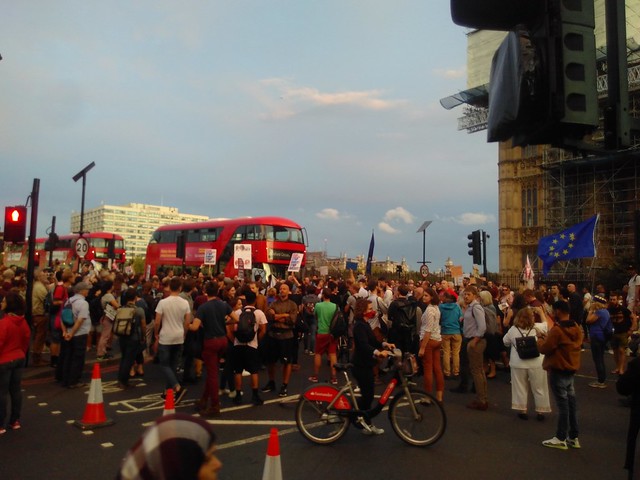 As I got to the bridge, there seemed to be two competing chants, which morphed into a call-response of “save our democracy / stop the coup”. Despite the bridge being blocked to automotive traffic and a long line of stopped buses, there seemed to be very few cops around. Cyclists and pedestrians were still able to get through, although many seemed to be confused.

I was slightly disappointed to see EU flags. I left mine at home on purpose. I feel like an assault on democratic processes is a larger issue than Brexit and that people on all sides of that issue might be alarmed by the PM’s actions. I would want anyone who was concerned about democracy to feel welcome.

It was not a large crowd, at all, just many people milling around in the intersection, singing and chanting. Other chants included, “You shut down the parliament / we shut down the streets.” A child stood near me was delighted to hear his mother singing “Oh Boris, you wanker!”

There seemed to be a wide diversity of ages present, although nobody elderly and few disabled people. It seemed to be about 70-80% white. 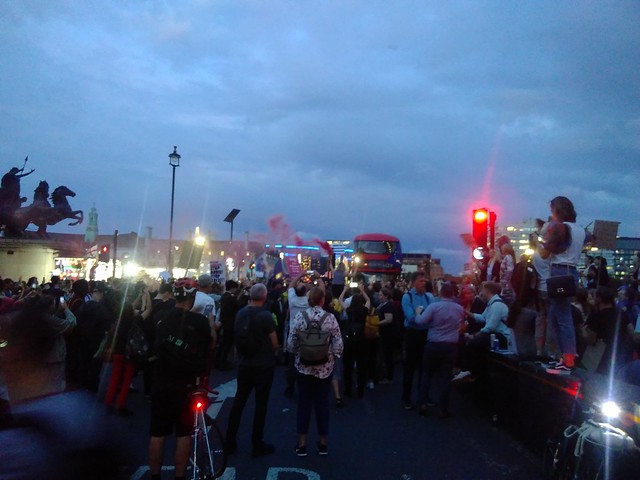 After a while, some fake-cops did arrive and began helping the buses get turned around. It was also starting to get dark and a lot of families left and people who had been out for hours started to go home. As the crowd thinned, the cops told people to disperse or be arrested. I chose to disperse and wandered down to parliament square where there were still many more people, also blocking traffic. 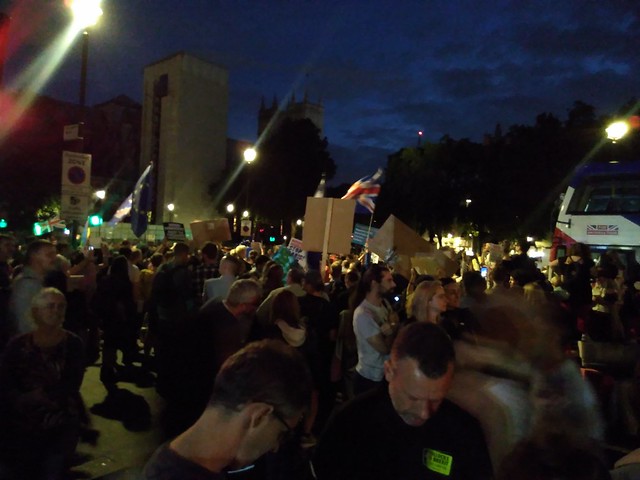 There were helicopters buzzing overhead and a much larger presence of regular police , who did a lot of marching around from one side of the square to the other. People in the road, like at the bridge were chanting and singing. A reporter from RT set up next to where I was standing. Some other protestors came up to him and joked, ‘So you guys are the ones who caused all of this!” But nobody was hostile to them, which I was slightly disappointed by, although unwilling to act alone.

Eventually, the crowd in the square decided to become a silent protest, which sucked a lot of energy out of things, although also it was getting late and people were leaving. Many of them sat down in the road and some speakers got up and gave Occupy-style “mic-check” speeches about what to do when they got arrested. 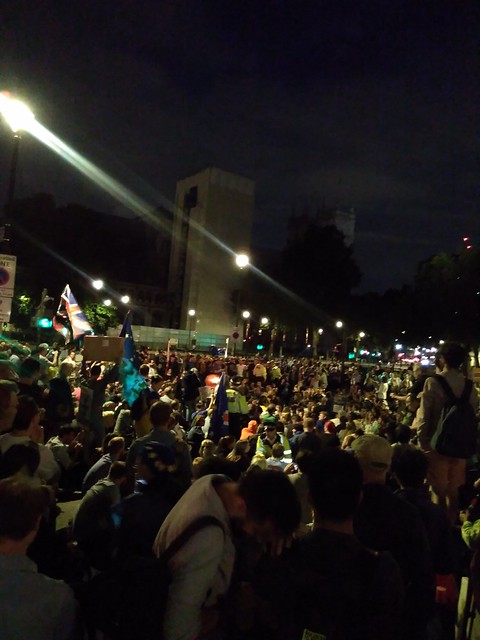 As the crowd shrank, and the police outnumbered us, but nobody was being arrested, I started to wonder when last call was at the pub over the road. It turned out to be 11:15. When I got out, everyone was gone and I don’t know what happened to the last stragglers.

As I spoke to straggling drunks, however, one especially intoxicated you man said, “fucking American!” to me and forcibly grabbed my jacket. The other guy to whom I was talking peeled him off and sent him on his way.

As a citizen, I have a clear right to protest. But as soon as I open my mouth, I’ll always be foreign. The xenophobia brewing in the anti-democratic moves by the PM give me serious cause for alarm.