As I was in Brighton on a short holiday, but it’s a constitutional crisis, I took some time out of loafing to go to the protest. 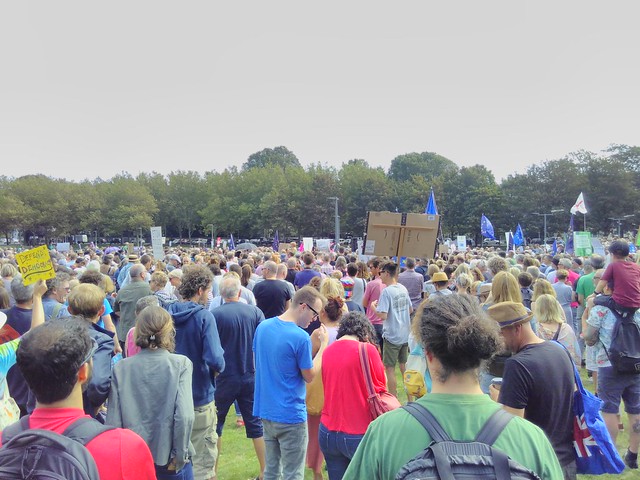 I showed up and it was a few hundred people and the PA was broken. However, they repaired it and the protest continued to grow for it’s entire duration.

There was already a protest scheduled for this time and date, about Climate Change and it’s links with imperialism and colonialism. This had been organised by QueerAF, a Queer and Trans activist group that engages specifically with the rights of migrants and people of colour. They felt that the emergency of an anti-democratic (and possibly pre-fascist) PM was very strongly related to the event already planned and so the protests were combined.

These are the notes I took during the speeches:

The PA is fixed. The speaker is making the point that we are responding to an attack on democracy and not (just) Brexit. We are in solidarity with all who want to protect democracy.

The next speaker calls for unity. “We are in a pre-fascist situation.” Everyone concerned about this must work together.

Queer AF speaking about the importance of being inclusive to trans people and BAME. Johnson is a threat to all marginalised people. A hard Brexit is a threat to the LGBTQ community. Parliament cannot raise these issues of its suspended. The queer comity is dependent on European civil rights laws and courts.
#QueerAF is asking for allies. The crowd is enthusiastic.

Caroline Lucas is enormously popular. She calls the current government “No deal, Trump-first.”
She pledges that parliament will meet in the house of commons or elsewhere. “This viscous form of brexit was never on the ballot. Johnson has no mandate for it.”
She pledges solidarity with EU migrants.
“We will use every peaceful easy we can to oppose that culture capitalism.” Of US companies asset stripping post-Brexit. (The PA dropped out on “peaceful”)

A union organiser says this is no longer about leave or remain, but about democracy and the rights of workers. Unions must strike to protect workers. We must be on the streets. This cannot be soon from above, but from the grassroots. We must say to our colleagues and neighbours, “I don’t care how you voted in the referendum.” I want to protect us from neoliberalism. Unions have power to act.

Feminists Against Fascism says the government is white upper class men who don’t represent us and don’t care about democracy. It is fine now for us to stand up and be counted. England has been a great democracy and is at risk of losing that. We must take to the streets.

Extinction Rebellion says this is an attack on our last chance to act on climate change. We are at risk of fascism, which will cause climate chaos, floods, does and droughts. Our freedom will enable us to defend the planet. We need to act now. We need to defend democracy and the climate. Extinction Rebellion shows that protest works. They can help train people in effective protest. Rebel Rising is a set of upcoming training events.

On The 20th, they’re will be a big event. Protecting democracy and protecting the planet are the same fight. We are together.
A child next to me has become alarmed and is crying.

A small child is speaking from the stage. Boris Johnson is very annoying and must be stopped. Parliament has not actually been porogued yet. There’s still time

A council member says the EU had prevented war for 75 years.
An unelected PM has used royal prerogative to undermine democracy and attack the post war consensus.
He calls upon MPs to occupy parliament. They must injunction the PM.
A general strike is called for. The ruling government loves history, so let’s telling them of Charles I.

QueerAF is also doing a demo right now about climate change and the Amazon. Climate change is happening everywhere. Capitalism is harming people everywhere. We colonised the world and trashed things for everyone. Democracy is needed everywhere.
They’ve got bust cards. This card tells you what to do when cops try to interact with you or arrest you.

Now somebody is saying cops are great.

A representative of the elderly is saying that Brexit is sexist. She says she thought this was going to be settled when she marched in the 70s.
This is a nationwide demonstration and a national issue. Our democracy is under threat. Donald Trump loves Johnson. England is not for sale.
The new MP this area is a remainder.

An Irish person says we are Europe. This is an infrastructure to create peace, to bring people together. Brexit will trash the Good Friday Agreement. We worked for peace in Northern Ireland and we cannot allow it to be trashed.

We are all EU nationals! The next speaker is an EU migrant. She represents CASE, which helps EU migrants with their legal rights. They aid people getting settled status, but old, retired migrants have failed in their applications. They have no where to go. Even settled migrants are having their rights reduced.
EU laws defend the rights of British workers. All of us are at risk.

An Amazon protestor from QueerAF is also from Paraguay. The Brazilian fires have reached Paraguay. The leader of Brazil has not been fighting fires and is on record of wanting to genocide indigenous people. Colonisation is ongoing. Indigenous people are at the forefront of fighting climate change. They are fighting for their lives. We must stand with them. Europe is profiting from South American deforestation. We must become sustainable.


We must fight for democracy everywhere. Let’s not forget that the Amazon is not just an ecosystem or a source of oxygen, but also people’s homes.
Standing for our own democracy must also mean standing against colonialism. 900k people’s lives are at risk in the Amazon.

A queer tabs sex workers co-op is showing quietly about colonialism and borders. We don’t know or history. There were hundreds of slave owners in Sussex. 70 million people are refugees in the world. We are safe to demonstrate here, but most refugees cannot. We must be on solidarity.
Brexit is racist against people of colour. The Windrush scandal is not confidence. We must stand in solidarity.

Goths against Bojo says the upcoming shortage of medicine will kill her. 75 © of medicines cone from the EU. The government has been stocking up on body bags because they know sick prior will die.

The march is starting and the MC fucking loves the police

But first, a poem!
It is about the need for solidarity. It is urgent and good.
People fought for democracy. We must carry on.

We then lined up in a march which was big enough that it took quite a while to get out of the park. 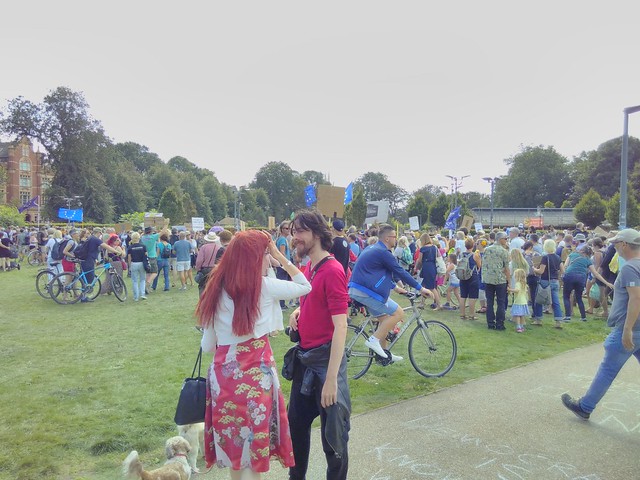 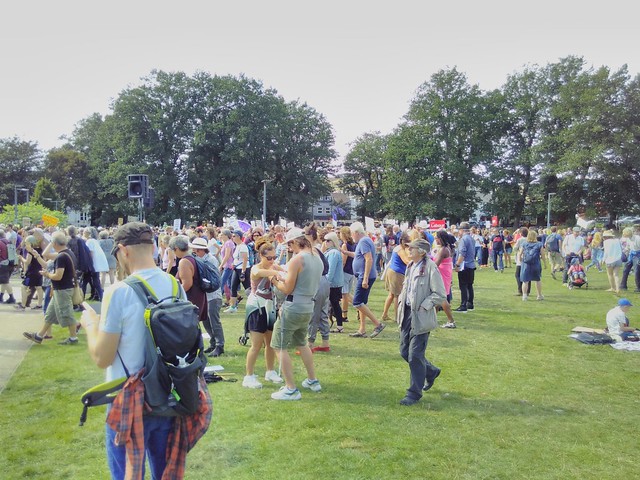 We marched down to the Brighton Pier and then turned left. The MC was keen that people play instruments if they had them. There was one very nice trio who did have instruments. 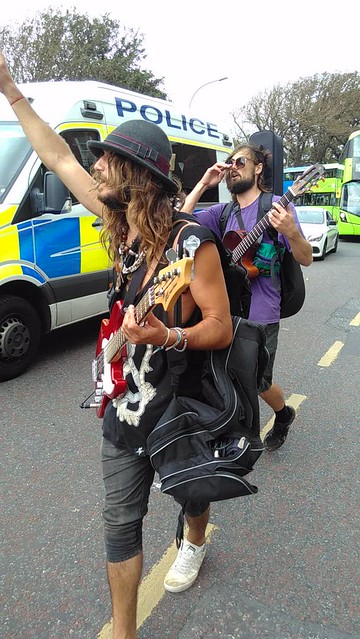 I would estimate that there were a couple of thousand people marching? I was very near the back and could not see the front. 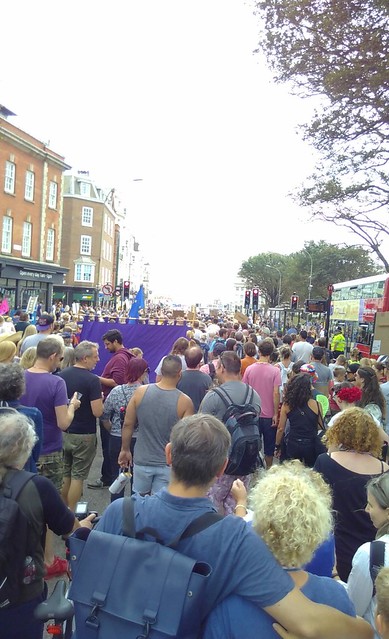 Shortly after we reached the pier, I peeled off to go join my friends and to get some of the holiday I’d come down for.