I actually have no idea why the bill for gas and electricity is so large, but now I know why it came to a name that I don’t recognize. It used to be in the name of one of my housemates. The guy that moved out (thank god). When he moved out, he didn’t tell anyone. I finally asked his sister weeks later and she confirmed that he was gone, although I was pretty sure that’s what had happened when I saw that the TV and all the toilet brushes disappeared.
When he left, he changed the bills to be under a fictitious name. And didn’t tell anybody, except possibly his sister, what name to look for. So last week, I saw a letter from the electric/gas company addressed to an unknown name, and realized that I had given no money to either company in quite a long time. I opened it and it alerted me that the gas and power was going to be shut off in a few days time unless we sent them money. A lot of money. The bill is incredibly high.
I called the company and asked if it possibly dated from before we moved in. They refused to discuss anything with me unless I faxed in a copy of my tenancy agreement. I couldn’t not get them to agree to delay shutting things off, even. So I did that and they promised to send a revised bill and have not done so.
And then I started talking to my housemates. The sister refused to pay anything and demanded to know why I had called them. (Personally, I think of it as kind of a disaster when power and gas get shut off, but I’m also the sort of person who replaces lightbulbs. Indeed, I’m the only person in this house who replaces lightbulbs.) She claimed the electric company was lying about the amount that we owed. We had already paid bills for the time covered under that bill, when it was in her brother’s name. I asked if she could produce copies of these bills, as that would surely help resolve any disputes. She got suddenly very shouty and defensive.
There was an interesting phrase on the bill. It said it was extremely accurate because they had sent somebody around to read the meter. Apparently, the previous bills all said they were the amount that the residents had called up to report.
Now, this is pure speculation on my part, drawn from conjecture and partially remembered rants of my very ranty ex-housemate, but what I suspect is that he was calling them up every month with invented numbers on the meter. Then he switched it to a name unconnected with him and hoped that nothing would get shut off before his sister moved out.
How much is the bill? Less than my monthly rent in London is going to be, but not much less.
The gas/electric company promised to send something within the week, when I explained that we were all about to move and I needed to see something in writing to present to my housemates or else I would get stuck with the whole thing. They made false promises about mailing things.
There’s false promises and duplicity all around. And I’m going to get stuck with the entire bill. Because the only way I’m getting any money out of the lying weasel or his sister is going to be to take them to court. And the whole process will certainly involve a wall of manic shouting from both of them. I have more financial capital than emotional capital. I can pay money and make the stress go away.
I was joking earlier that the vibe living here made me pine for the good old days of a disintegrating marriage. Truly I have cursed myself to an expensive divorce.

I’m currently combing the internets looking at flatmate listings for London. I hope to find LGBT-friendly folks someplace fairly central that will take my dog and I for £110/week or less. This is more than double what I’m paying now and I’ll have to also ride trains a lot more. And yet, it’s still definitely on the low end of what’s out there. I have faith, though. Somebody will be taken with my dog or that I have a recipe for cactus chili (somebody was recently kind of amazed when I talked about eating prickly pear leaves, so you never know).
My queer-focussed ad says:

I’m a 32 year old ftm looking for London housing starting by July 1. I’ve been transitioning for about 6 months. Before that I was a dyke. I’m a post-grad student, with a dog. She’s an 8 year old lab mix. Friendly but reserved. She is old and spends all her indoor time sleeping and would not require any attention from you. She gets on very well with other dogs and has lived well with cats before (she’s overly curious at first, but soon returns to her sleepy state).

I’m looking for a home with some communal space and queer or queer-friendly housemates. I’m from California originally and like to think of myself as relaxed and easy to get on with. I’ve spent the last 3 years abroad and plan to live in England for the next 2 or 3 years while getting my PhD. I like to play music, but I’m not loud. I don’t mind if you are.

Feel free to contact me at celesteh@gmail.com or to pass along my information to your friends who need a housemate.

I really don’t want to have to be stealth in my home. Some of my mail gets addressed to Miss or Ms. I recently told my cable company representative that my bank had mistakenly listed me as “miss” because they thought I had a girl’s name. This story is apparently believable – different cultures/countries do gender names differently, but it wouldn’t explain why my former landlords were all using the wrong pronouns. So I don’t know how much choice I have about being out – not that I want to live in fear of being found out.
Part of what was nice about being in Holland is that I was kind of just a regular person again for a while. It would be nice to be like that more of the time.

I’ll be in Birmingham tomorrow (Saturday) and back in The Hague on Sunday night for my last week here. My plan for this weekend is to find a flat and over the next week, I plan to put my things in boxes and lug them to the post office. And also go to the SuperCollider con in The Hague.

I am visualizing what I want: It’s £300 / month or less including utilities. It’s 8 km or less from school along a reasonable bike route. The folks who live there like dogs. They’re easygoing with a nice vibe. There may be more than one of them. They are relaxed. The room is big enough to hold me, my dog and my gear. There is internet in the house. My room has a window. It has wood floors or other hard material. The house is in good repair, especially the plumbing. The ‘fridge works. There is a good place to park my bikes.
I can be flexible about some of these points. Do you live in Birmingham? Are you looking for a flatmate? Send me email, quick!
I spent hours of my life yesterday looking at flat ads on a service that i’ve subscribed to and sending email to the folks listed there and I’ve gotten exactly one response – a no.
I guess I can just mail everything to school and deal with it later, in case of disaster. 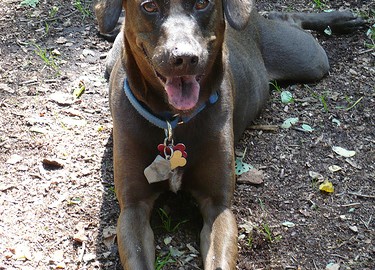 As you can see, my dog is very cute. Check out how her back legs are sprawled out, frog-like. This is how she normally sits, when she sits. It means she can’t spring up too quickly. Which is ok, as she rarely springs up. A more typical portrait would have her lying down asleep.
(maybe I should get her thyroid checked, actually.)
Not that she doesn’t run around when appropriate. When this picture was taken, she had just finished chasing a ball around in the woods. So fun! So cute! But indoors, she’s more sleepy. And very quiet. She only barks when a stranger is trying to come inside by themselves. (Useful) Or if she’s tied up outside a grocery store.
If you look very closely at this photo, you will fail to find evidence of fleas or ticks. Not only because the resolution isn’t anywhere near good enough, but because she gets a treatment every month which rids her of pests and protects her against heart worm.
So, if you, in Edgbaston, East Midlands, England, who has a free room in your flat, were to rent to me, you would have a very cute pet around and a bit of additional security, but with no responsibility. You could get all the belly rubs you wanted, or let her sleep (she’s not pushy at all) and never have to pick up after her. Really, it’s perfect for you.
Did I mention that she’s small?
.flickr-photo { border: solid 2px #000000; }.flickr-yourcomment { }.flickr-frame { text-align: left; padding: 3px; }.flickr-caption { font-size: 0.8em; margin-top: 0px; }