As reported in my previous post, I created some moulds out of PLA for silicon casting. The second version of the mould fit together well. It had a single pour hole in the larger outside block.

When pouring silicon into this hole, there was no route for air to escape the mould and the silicon was slow moving within the mould. The silicon began to harden before even a fraction of the pour was complete.

Despite the small amount of silicon that got into the mould, it was extremely difficult to open, showing that the use of a release agent is necessary. Also, the slowness of the pour shows that a retarder is required.

I’ve made two versions of an updated mould. The larger mould piece has additional channels for which silicon to flow in and small air channels for air to flow out. There are now two identical pour holes and two smaller air holes. The airholes are connected to a narrow channel running for the length of the mould, which connects to the topmost part of the internal cavities. This should allow air to escape and if some silicon gets into the channels, it should not cause a problem. 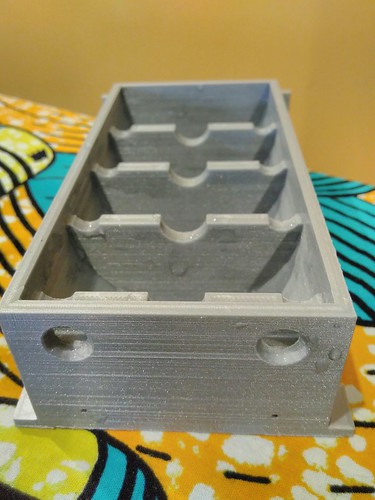 The other half of the mould has two new designs. The aesthetically superior one cuts out a round channel for silicon flow. This channel is the same diameter as the cut-outs of the other part of the mould, which should give it a unified look. However, this creates an overhang. As the tentacle will be cast in a soft material, it should hopefully be possible to peel the tentacle from the mould without doing it damage.

Because the overhang may fail, I’ve also created a version of that half of the mould that has narrower protrusions. This should also allow better pouring channels for silicon, but will cause the walls of the finished tentacle to be much thicker on the outside edge. 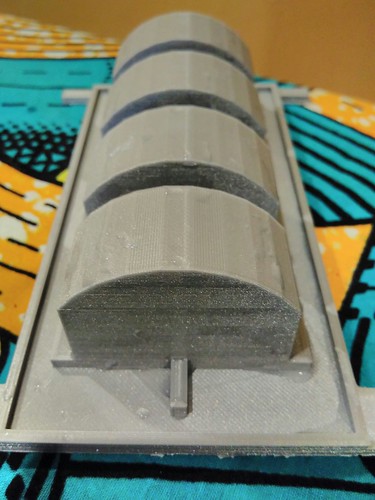 In the mean time, I’ve been experimenting with bioplastic and food waste. PLA is sort of biodegradable and recyclable, but silicon is not.

My first attempt at bioplastic was overly ambitious. Banana peels contain starch, so I used those. I used a lime peel as an acidic element to get free ions. I added coffee grounds as well. For preservative, I added a mixture of sage and tea tree essential oils. And used glycerol as the plasticiser.

The shape I attempted to make was a flower pot, moulded over an empty jar. While the material did mostly bond together, it took more than a week to fully dry and has had some cracking.

Some of this may be due to how ripe the peels were- presumably this caused some of the starches to convert to sugars. Also, I failed to remove any parts of any peels, so fibres and stems got into the final product. While these were unintentional, they have probably aided the stability of the structure. 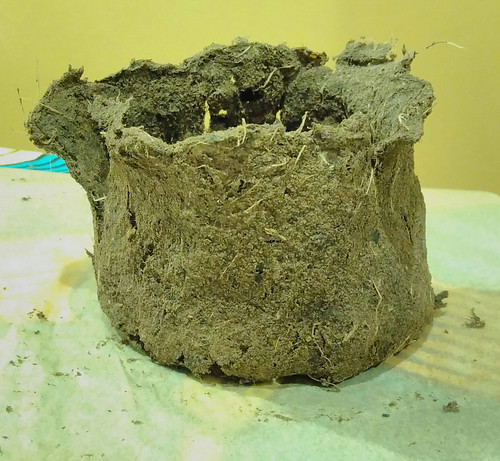 For this, I used slightly more corn flour than I’d use for gravy, as much liquid as I would use for custard, a teaspoon of glycerol, a teaspoon of vinegar and a few pinches of rock salt.

I cooked all of the ingredients together until they started to thicken like custard. I then transferred the mixture to a takeway container and added a teaspoons of sage essential oil as a preservative. I applied the mixture to paper maché animal horns, and put it in the oven at a low heat.

These took a day to dry, but the plastic has come out successfully. While I don’t have any good measurements for ingredient ratios, it seems I used a large amount of glycerol relative to the corn starch. This created a very flexible rubbery plastic, not altogether unlike silicon in consistency. 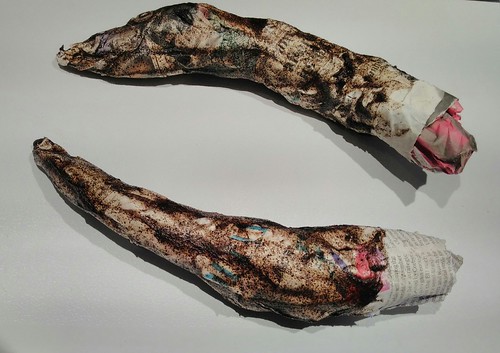 Previous research into bioplastic soft robotics is available. The paper, Soft Pneumatic Gelatin Actuator for Edible Robotics [DOI: 10.1109/IROS.2017.8206525], especially caught my fancy. While a theatrical robot falls outside of their potential applications (which charmingly suggests “food transportation where the robot does not require additional payload because the robot is the food.” (Shintake, et al., 2017, p 6221)), an edible robot is a biodegradable robot.

Using food for non food applications also has ethical issues, however. Part of my goal with bioplastics is to utilise food waste and as such, I will be investigating the possibility of highly flexible banana peel actuators. Although the starch in these peels is edible, it’s usually discarded. Using this for plastic thus reduces food waste and potentially may help highlight the culturally-based waste of edible items.

Finally, I can make this kind of plastic in my kitchen and don’t need to access a workshop.

My first bioplastic tentacle section used an unmeasured corn flour plastic similar to the plastic above. It contained no vinegar but instead copious amounts of sea salt, as this also frees up ions and may help preserve the plastic. For additional acidity, I scavenged a lime that had not been juiced to the fullest possible extent and squeezed the remainder into the plastic. The preservative was 1 tsp tea tree oil. As I did not strain the lime, some pulp got in, probably rendering moot the various preservative attempts.

I brushed the inside of the mould with sunflower oil. Corn flour bioplastic starts to set even more quickly than silicon and there are really only a few seconds to decant it into the mould. As such, I did not use the pours holes, but instead spooned the plastic into the mould and struck the lid with my hand to force it down. Excess plastic leaked from the top and pour holes.

The drying process for starch bioplastic seems to rely on access to air, so it was still completely uncured after several days and was damaged by opening the mould to check on it. 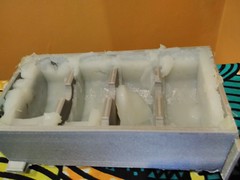 Shintake et al, mentioned above, used gelatin-based bioplastic, which may be better suited to this application. This is also often a food-waste product, however, it’s made via an industrial process using waste from the meat industry (Etxabide, et al., 2017) and is not something I could really make at home. I’ll be looking at whether I can extract pectin from fruit peels and use it for plastic.

As all the tentacles need to be identical, proper measurements and consistency will become extremely important.

My moulds are designed to create the tentacle in two parts which must be joined together with an airtight seal. While this seems straightforward in silicon, I don’t yet know how difficult it will be with bioplastic. Perhaps a hybrid silicon/bioplastic tentacle is the answer, as I do not actually want my robot to be eaten.

The durability of this material is also unknown. One design studio on YouTube says that essential oils act as preservatives, but it’s unclear how long this prevents decay.