After a failed print, I decided to rationalise my moulds. These are created via a parametric tentacle design program in OpenSCAD. Obviously, changing the mould requires program changes, but this time my goals were both to ensure that it can create a mould across a wide range of parameters for users who want unusual sizes and to include an optimal ratio of parameters based on actuator research.

My program does not cope with tiny sizes. It’s expected that tentacles designed with it will be nearly as long as the print bed of a Ultimaker or longer. However, it seems likely that optimal ratios will be constant across actuator sizes. I adopted the ratios given by K Ogura et al, developed for tiny actuators. (2009)

As their actuators are squared and mine still have rounded edges, it may be that these are not optimal, however, I do feel that the new, narrow mould has higher aesthetic appeal. 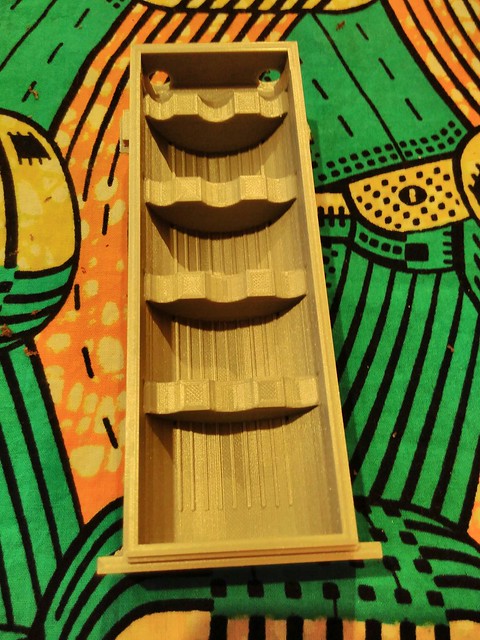 Before trying to cast this, I went to the 4d Model Shop to discuss the difficulties I had with my last silicon cast. The person working around the casting section of the store is extremely knowledgeable and helpful. She suggested that what I needed was a lower viscosity silicone, but as I still have a quite a lot of the high viscosity left, she suggested I paint the mould with a small amount of it, close the mould, mix up a second small batch and pour that in the top. She suggested that may allow the silicon to flow through the entire mould before it sets. Unfortunately, the shop does not sell retarder.

She also told me that although silicon does not adhere to PLA, the porousness of a 3d printed PLA mould creates a lot of surface irregularity that silicon will flow into, making the two part mould extremely difficult to separate. The mould must first be sealed.

Epoxy sealant is toxic and may contain elements that prevent silicon from curing, so she suggested I experiment with a high gloss polyurethane sealant and then paint liquid Vaseline over that as a release agent.

I painted a single coat of sealant on one mould section, followed by the vaseline. I then mixed up a tiny batch of silicon. During this process, the scale turned itself off, so I was forced to estimate ratios of the two part compound. I therefore used two mould sections, one as a control group in case the haphazard ratio has curing problems.

The experimental section had a thicker piece of silicon and was made slippery by the Vaseline, which may be why it was more difficult to remove that the section that had no treatments.

My next steps will be to:

I’ve currently got a small batch of corn plastic drying, which is taking more than a week. The volume is decreasing significantly and I’m not sure it will be enough to make a test cast once it dried enough for me to melt it.

I’ve found some very promising research about using food waste to make bioplastic. The experiment was done using a dilute solution of hydrochloric acid – so dilute that vinegar is more acidic. I wish to see if vinegar would also produce this result, but it requires a food dehydrator and the ability to stir a solution at 40C for more than day – so a magnetic stirrer hotplate.

There is also research about citrus peels, specifically. This is perhaps the most interesting avenue. Pectins are stretchy like gelatin, which has been tested in actuators. It’s also easily available in my area. The processing is very much like other food waste processing, so the same equipment is required.

This is all taking much much much longer than I thought it would and I have to say, I’m starting to feel extremely discouraged. While the 3d programming has turned out to be a lot easier for me than I anticipated, virtually everything else has been vastly more difficult. I was hoping to have some kind of prototype by autumn, but this looks less and less likely. My workshop access has been through my primary employer, the University of Kent. However, the department I teach in is closing and thus I’m becoming redundant over the summer. It’s still unclear whether the arts workshop is also closing at this time.

Cooking bioplastics in the kitchen is extremely unpopular with my spouse and I don’t really have space for a food dehydrator. I hope the London Hackspace may be able to help with this, however, they’ve moved rather a long way from the old neighbourhood.

One thought on “More tentacle attempts”