I’ve put some resources up for my students and I’m going to copy them here in case they’re of wider interest. I’ve made instructional videos for using some of the tools.

Made by me. My students like videos. I’ll post text here later. All of these are for Mac. 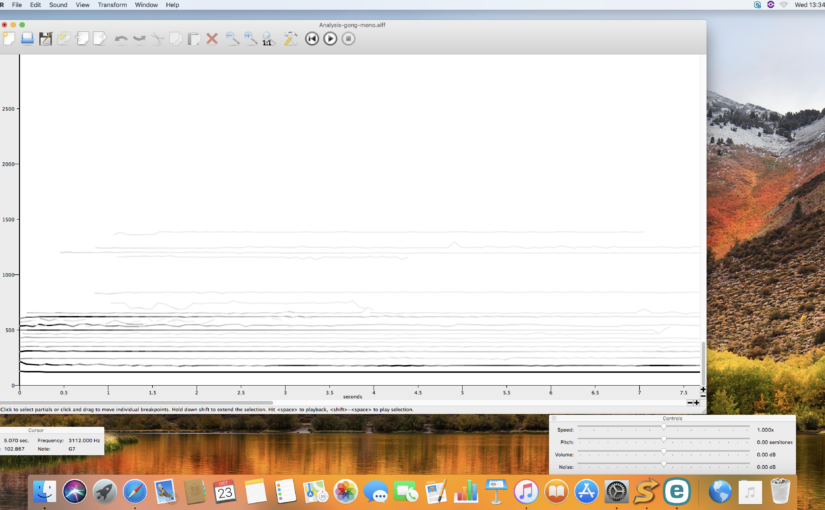 Sinusoidal Partial Editing Analysis and Resynthesis is a zero-cost program for Macs and Windows. It works with the latest Macintosh system update.

It is a program that does FFTs of audio files to display a spectrum which you can then edit. It’s not as fully-featured as AudioSculpt, but it’s compatible with your new Mac and the price is right.

When you open a file, it starts by asking you a few questions.

Constituent frequencies of a given sound, if they’re loud enough to be important, are called partials. All of the lines in the big window represent partials. Ones towards the bottom are lower in pitch and ones above are higher. Time moves from left to right. The darker partials are louder.

If you want to hear the sound, press space bar. If you don’t hear anything check the preferences and make sure audio is going to to correct output.

The transform menu contains a several things you can do to the sound. If no partials are selected, these will apply to every partial. Otherwise, they apply to only the ones which are selected.

To select a single partial, pick the arrow in the tools menu, and then click on the partial. To select a rectangular area, pick the plus sign, to select a free area, pick the lasso. You can shift click or shift select to grow a selection area. Also see the edit menu for options like inverting your selection.

When you hover over an item in the tools menu, the name of the item appears. These items include time stretching, moving, shifting, transposing and drawing in new partials. You can use the time stretch tool to just stretch selected partials in one part of the file.

You can save files, which are the analysis files that SPEAR has created and which you’ve modified. You can also save a rendering as an audio file. There are a few choices with this. You can do an additive re-synthesis using a bunch of sine waves or an IFFT. If unsure, experiment to see what sounds best with the particular file you’re editing.

There is no manual for SPEAR, but there is a single webpage with some explanations. Or there are some technical papers you can fine on the program’s website.

This program has been written with GTK portability in mind, but I could not find a link to source code and no linux binaries seem to be available. I have written to the author to ask if he intends to make this a FLOSS project, as it seems like a really good fit for the Ubuntu Studio distribution. I’ll update if I hear back. Sending an email like this, is, of course, asking a favour, so I’m a bit worried that he might get this question a lot. In any case, releasing a mac compatibility update was definitely a public good.

In our current political climate, I think it’s important for teachers and academics in every discipline to take a stand in favour of diversity and inclusion. One important way we can do that is to highlight contributions in our field by members of minority groups. One way into this in any discipline is by including some history. So in computer science, teachers could mention that Alan Turing was gay and that Grace Hopper, inventor of the compiler (and, indeed of the idea of compiling), was a woman.

When teaching music and presenting a piece of music to students, I give a few biographical notes about the composer which are mostly related to their musical background and influences. This is also a good time to mention any minority status. This is important because students will otherwise tend to assume that everyone is a cis, straight, white man. It can seem a bit weird to mention that someone is gay, for example, without other context. There are a few ways to address this.

If a person’s minority status is known to effected their opportunities, then this is is a good way to bring it up. To take an example, Milton Babbit was going to be the first director of The Columbia-Princeton Electronic Music Center. When they realised he was Jewish, they rescinded the offer and hired someone else. After a year, they came back to Babbit and re-offered him the job. It’s good to tell students about this and condemn it, to let them know that discrimination was more recent and widespread than they may have imagined and to give the idea that it was wrong and should be opposed.

Another way to bring up somebody’s status as a minority applies if they were a member of a milieu at least partly defined by minority participation. So, for example, a lot of jazz musicians are black and, indeed, some American forms of free improvisation were called “black music”. In general, mentioning milieus is good because it gives students a sense of larger scenes and places they might do additional research. It also communicates that minority involvement was significant and larger than the few individuals discussed in class.

Otherwise, a way to bring up a person’s membership in minority groups is to just tell students you think it’s important to mention it so they know the field is diverse. This is also good because it demonstrates that inclusion is valuable.

It’s important not to make somebody’s status as a minority the defining thing about them. They’re a topic for the class because they relate to the subject the class is covering, not because they’re a minority. One must strike a balance so as to communicate that minorities have historically been part of a discipline and contributions are important and will continue. Over-emphasising their minority status can backfire and make it seem like they’re being highlighted for being weird and different. I try to bring minority community membership up just once and then not mention it again unless it’s relevant in their work.

With contested identities, such as trans people,talking about their background models how to speak respectfully. It’s important that if a student starts giggling or otherwise treating this as a joke, that they’re told to stop. Here is a guide for how to talk about trans people in the classroom.

To give an example of how I might talk about this:

Wendy Carlos has done a lot of work on spatialisation and has some good blog posts about it – I’ve put the links on Moodle. She is an American composer who started out at Columbia-Princeton, but then went in a less experimental/more popular direction. She’s best known for working with Moog synthesiser and worked directly with engineers there to design modules, which she used to do several film sound tracks, including Tron and A Clockwork Orange. She initially made her name with Switched on Bach which was a recording of Bach pieces done on synthesiser. This album was hugely popular, made her famous and made a lot of money. She used some of the proceeds of the album to fund her transition, which she kept secret for nearly a decade- dressing up as a man when she appeared publicly because she feared discrimination. Fortunately, when she finally did disclose in 1979, nothing much bad came of it, but it must have been miserable to spend so many years in (reasonable) fear of a backlash.

The popularity of her work shows a strong popular appetite for new timbres, but in a familiar context, like Bach. We’re going to listen to a piece by her …

When you’re talking about a member of any minority group, it’s best to assume that at least one of your students in a member of that community. the intent is to be respectful and to make that student feel included, while at the same time giving other students the idea that members of this minority groups belong in their field. Never be neutral about discrimination.

It’s impossible to get this right every time. Sometimes talking too much about discrimination can traumatise the students who also experience it, or glossing over it can fail to condemn it forcefully enough. The important thing is to keep trying to include this and to get a feel for the students you’re teaching, as every group and every institution will be different. You may find, for example, that student comments about works by women tend to be more negative than works by men. One way you might address this is to present the works first and ask for comments and only talk about biographies afterwards.

Keep trying things out. We can make a positive difference in our teaching, no matter what our subject it.